Between the 2nd and 7th of November I went to India as part of a Parliamentary Delegation representing the House Standing Committee on the Environment and Energy.

Parliamentary committees are charged with investigating and proposing solutions to topical issues within Australia. They usually have five government members and three opposition members and come to some form of consensus on a topic - but not all of the time – through hearings, reading written submissions and considering the evidence. The Environment and Energy Committee has previously investigated topics as wide ranging as wild flying foxes to water management.

This Parliament, the early focus has been on energy and particularly nuclear, as we seek to understand the circumstances and prerequisites necessary for any future government’s consideration of nuclear energy generation. Specifically looking at waste management, transport and storage, health and safety, environmental impacts, energy affordability and reliability, economic feasibility, community engagement, workforce capability, security implications, national consensus, amongst other things.

We were sent to India to understand their energy system, how it’s developing, the challenges and obstacles facing their environment, cities, and climate broadly.

The trip was broad ranging and rich, we variously went through cultural experiences, to visiting nuclear power plants to talking with government ministers and think tanks. India is an extremely vibrant and diverse country with an old culture so it was a privilege to travel there as part of an official delegation. 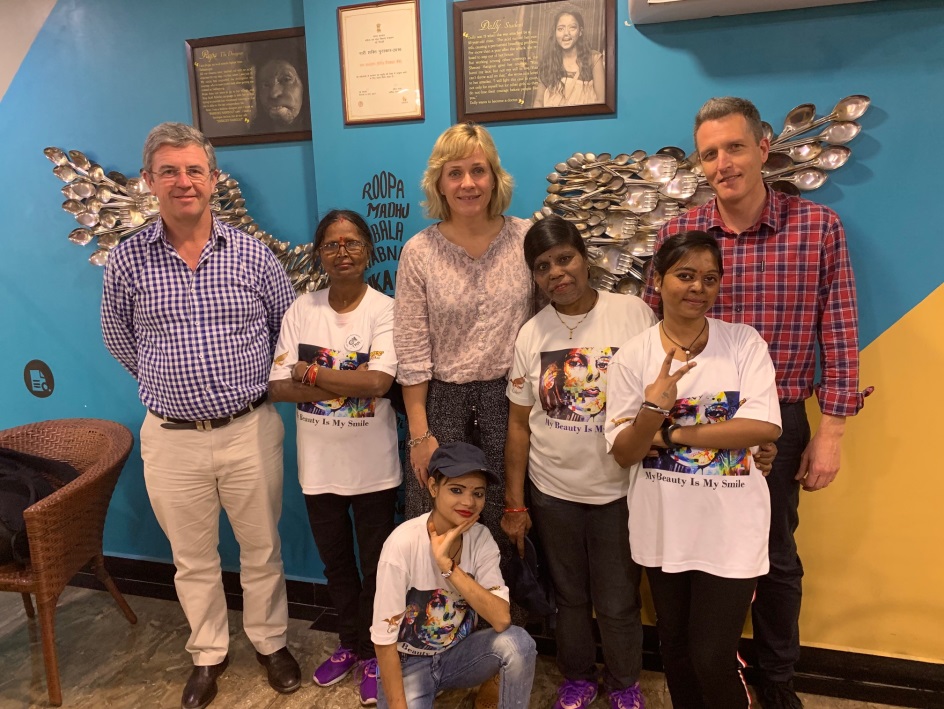 At Sheroes Hangout with Josh Wilson and Keith Pitt

Prime Minister Modi, was re-elected in a landslide at the last national election. One of the key pillars of his success in his last term his plan to electrify India. This plan includes a huge focus on Renewable Energy. Impressively, India has already met several of their renewable targets.

India had an initial target for 20 GW of renewables by 2022 as part of their contribution to the Paris Agreement and as a result of achieving that in 2019 they have ramped up their ambition, shooting for 170 GW of renewables by 2022 and 523GW by 2030. To put this in perspective, that is 10 times the size of Australia’s grid. They believe this initiative will lead to 1.1 million jobs. This is made possible as renewables are now the least cost form of new generation in India.

While India has ambitious targets for renewable energy, the challenge will be how to integrate new wind and solar which is where our experience can be useful. As global leaders in energy transitions there are enormous opportunities for Australia to supply the expertise, technology, material and share knowledge for their transition.

This is also an opportunity for Australia to explore options outside our traditional strategic trade partnerships with China and the United States. The Government is looking at fostering a trade relationship with India, and I encourage this development.

Overall, India was impressive with their appetite for new energy generation and will continue to impress the world if they keep meeting and exceeding their targets under the Paris Agreement.

One of Modi’s key policies  is a national focus on cleaning up waste, air pollution and implementing clean water and hygiene practices.

Policies to get there include expansion of the national air quality monitoring network, public awareness, an emphasis on enforcement of breaches, sectoral specific strategies and even strategies like restricting cars on the days they can drive by number plate. I.e. even number plates on one day and odds the next.

These policies also align and work in synergy with India’s ‘National Action Plan on Climate Change’, it’s plan for electric vehicle uptake, the ‘National Electric Mobility Mission Plan’, which will have six to seven million electric vehicles on the road by 2020 and it’s ‘Smart Cities Mission’, discussed below.

Although Australia is not on the same level, we have similar health impacts from air pollution. I would like to see Warringah wide air pollution monitoring and national policies to improve pollution like electric vehicles and phasing out of coal fired power being advanced. We can do a lot more.

On Tuesday the 5th, we met with the Smart Cities Council India lead by Dr. Arunabha Ghosh. The Council was formed under Modi’s ‘Smart Cities Mission.’ The primary objective of this program is to enhance the liveability of 100 cities in India by incorporating innovative technologies like artificial intelligence, retrofitting buildings with solar, increasing walkability, preserving open and green spaces and promoting transport options amongst other things.

A total of $23.31 Billion will be invested into 5,151 projects across 100 cities. $9 Billion is already in construction or development with another series of tenders to go out in 2020. We are doing similar work in Australia through various programs including the Government’s ‘Smart Cities and Suburbs Program’, which distributed $50 million in grant funding to projects last year.

Feeding into city design and planning is also the focus on understanding what the key challenges that cities will face as the climate continues to warm. During the trip I met with the Council on Energy, Environment and Water who are doing great research into this area.

Steady increases in temperature, changing groundwater levels, increased rain in some areas and solar radiation will affect the durability and functioning of road infrastructure. These effects will shorten the longevity of road surfaces, increase cracks, expand bridge joints, affect the ability of drainage systems to cope, and affect the inland waterway system.

As a result Indian Government is starting to integrate system wide resilience and sustainability planning into all levels of the decision making process to cope with these added climate impacts. I am calling on the Australian government to do the same.

Despite the heavy focus on energy and environment, we did spend some time understanding the cultural obstacles a modern India is trying to overcome.

On Sunday the 3rd, we visited Sheroes Hangout Cafe, which was established to support victims of acid attacks, a serious issue in India

Acid attack victims face serious challenges gaining employment and by providing jobs. The café is able to assist and empower victims to live a normal life as well as raise awareness amongst the broader community. Some of the café’s profits also go into national campaigns.

It’s encouraging that both India and Australia are both separately taking on gender based issues.